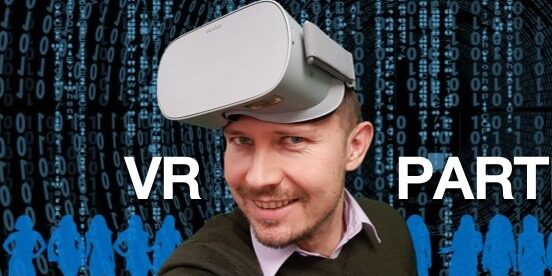 The objective of the COMPACT project (EC, Horizon 2020) is to increase awareness (including scientific, political, cultural, legal, economic and technical areas) of the latest technological discoveries among key stakeholders in the context of social media and convergence. A fruitful trend in COMPACT three-year research was to explore the role and various aspects of advanced technologies and their impact on human rights and media literacy. Below we present ideas from the COMPACT Immersive Technologies Symposium (October 19 – 20 2020) which was marketed as European Immersive Technologies Symposium. The event was set up as a venue to engage with media convergence stakeholders over the topic of the latest, emerging generation of social media, leveraging Immersive Virtual Reality Technologies – Social VR.

The symposium was timely and relevant since the increased use of emergent online communication technologies became even more pronounced during the time of COVID-19. That opportunity was seized by major VR hardware and services providers, such as Facebook to change their strategies. In fact, there should be no surprise that during the time of pandemics Facebook announced at their Facebook Connect event that they had decided to merge their Oculus Labs (Oculus is the biggest VR hardware producer that FB acquired) with their core research teams and to open new, combined Facebook Reality Labs. Such move is logical after M. Zuckerberg’s statement in 2014: “Mobile is the platform of today, and now we’re also getting ready for the platforms of tomorrow. Oculus has the chance to create the most social platform ever, and change the way we work, play and communicate.”

The merger, in fact manifested itself in the very name of the 2020 Connect conference that was called Facebook Connect this year, not Oculus Connect as years before. That move from Facebook to diminish Oculus independence spun a lot of conversation in the domain. In that context, Facebook also announced integration of Oculus infrastructure with Facebook and therefore demanding VR users to have FB accounts. That move spun more controversy that resulted soon after in the German Federation suing FB over monopolising VR space as the only service provider. At the same event FB presented the new powerful, mainstream headset – Quest 2 that replaced the Quest 1 in just one year and outsold the predecessor in few months.

2) Major Social Media players already plan ahead to secure their place in the emerging space of VR and AR communications.

The already described business shifts seem to go largely unnoticed by regulators and mainstream media investigators who still “dwell in the past” focusing on what soon may become obsolete “legacy social media”. While policy makers and legislators try to catch up with platforms current business models, the key players are moving already to completely new markets.

COMPACT immersive technologies event was intended to spin discussions around the benefits and challenges ahead of the emerging, convergent VR media. Moreover, the intention was to communicate, discuss and validate COMPACT latest research in the context of VR as a new communication channel but also as an opportunity for the next generation, convergent media. The purpose was to highlight the key benefits for the EU industry and the potential avenues for EU leadership that should be considered and supported by the European Commission. There is no doubt, that the space of social media is currently totally dominated by the USA-based entities and as our COMPACT research results showed that is reflected in the specific biases and USA-centricity of the platforms. Despite continuous efforts no European company or organisation managed to challenge the hegemony of the foreign large social media entities in the European market. The emergent VR technologies create new markets and new opportunities for both EU-based communication as well as media entities to enter the space and secure strong position ahead of the global competition in Americas and Asia. Specific Virtual Reality affordances give it an edge over the mainstream social media communications as well as the opportunities for EU industry, organisations and creative sector to capitalise on the benefits brought by those technologies. Finally the challenges and areas that must be investigated further relate to the ethical and fair approach in the next-generation Social VR platforms delivery.

At this particular symposium the COMPACT team spent significant efforts to ensure the novel and quite experimental mode of presentation. The contribution of the event however, both as form and content is an asset of great value to convergent media research and broad media stakeholder.

The Material Edited by NUIG & M21F